There has been a great deal of progress with this build since our last blog post. To date the car has now been tested and raced! However it’s not been plain sailing all the way. Below James has put in to words the remainder of the build.

Since receiving the car back a little later than expected Bobby and I had the mammoth task of essentially rebuilding our shell into a track ready car for our practice session at Castle Combe, in just 2 ½ Days!!! It was clear that this was an almost impossible task; however, with a huge effort we managed to get all the necessary standard parts reinstalled, including the IMA battery and associated cabling, trunk lid etc, before continuing with the upgrades.

To give ourselves the best possible chance at completing the car we stuck to the bare essentials that we were confident we could complete which started with upgrading the standard suspension for some Spoon Fixed Dampers and Progressive Springs which fitted perfectly as we expected.

We then swiftly moved onto the brakes and swapped out the tiny 262mm discs and OEM calipers with some real stopping power. A set of Spoon Monoblock calipers and 300mm conversion discs were mounted on the front along with Dixcel pads, before swapping the rear pads over for a set of Spoon pads. We finished by changing the fluid for Dixcel 328 Racing and bleeding the new HEL braided system along with its new partnering components. The car was beginning its transformation.

We pushed on through the night getting the engine running again. The A/C was completely removed, including: the pump, hoses, matrix and core. To finish this off a fresh batch of coolant and shorter drive belt were added.

Next for a few performance upgrades for the engine, including the Spoon throttle body, Spoon Fit GE8 intake chamber and second decat pipe. Last but not least our lovely new CR93 wheels professionally equipped by Black Boots with R888’s courtesy of TOYO were fitted.

After working for 20hrs straight on the last day, including our full time jobs, we finally had her back together. We held our breath as we clicked the ignition over. Lights flashing like a Christmas tree, but none that we weren’t expecting. We depressed the clutch and for the first time in approximately one month we pressed the start button. She turned over and the engine burst into life, but for slightly less time than we’d have liked; in fact for about half a second. Looking at each other in despair we began a gruelling 4hr fault finding session only to trace it back to a fuel supply issue, but with the wiring diagrams in the manual that we’d lent out to our engine guru, we wiped our brows, downed tools, and at 6am, 24hrs later, we began a heart breaking ride home…

What was more depressing was the fact that we’d hired a transporter to get us to the test day but had to return it first thing in the morning, sadly without a refund. The Castle Combe Test Day was a failure, but the amount of work we managed to complete in the available time was tremendous, so hats off Bobby for his drive and determination. He actually forgot he put the wheels on the car and had no recollection of the work we’d completed after about 22hrs! Seriously one hell of a best friend! 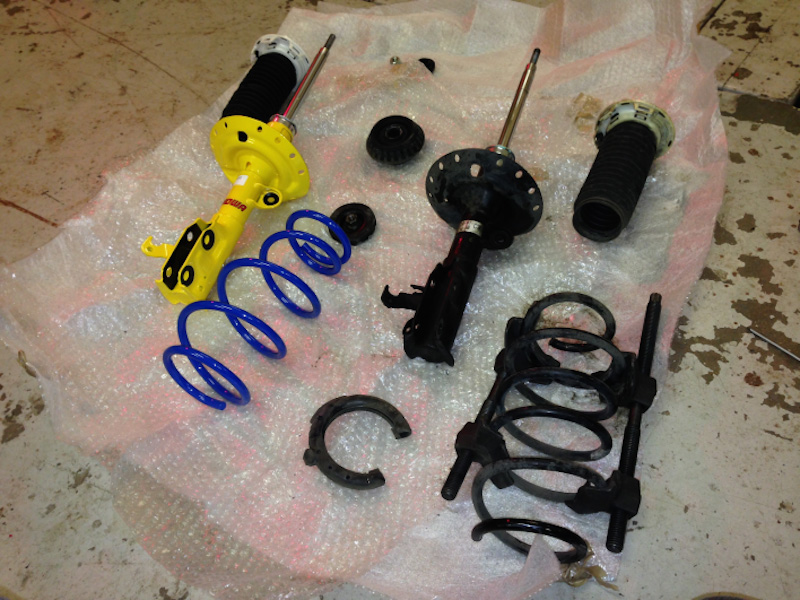 Posted in TECHNICAL RACE EVENTS By